Flying in style: Business class from Melbourne to Dubai via Sydney

We were lucky enough to travel Business class on our first leg of our RTW adventure, flying from Melbourne to Dubai business with Qantas/Emirates. It was something neither of us had ever done before, and when the opportunity to give it a go came up we decided to treat ourselves. Especially as we’d largely be staying in 8+ person dorm rooms for the next year or so, we wanted to get once last bit of luxury in before we truly began the backpacker life.

And it was great! Seriously great! We got priority check in & priority baggage, lounge access, amazing inflight food and drink service and chauffeur drop-off at our hotel in Dubai. If you don’t care about us bragging and just want to know how two unemployed (well I’m unemployed) and technically homeless backpackers could possibly afford to splurge on business class, but would like some tips to do it yourself click here! Otherwise…

We arrived at Melbourne airport super early, around 730 am for an 1100 flight, (due to my parents needing to get to work that morning and Melbourne traffic being the pits). We weren’t overly worried, as Dan’s Ma says “you can always find something to do at the airport”, and we were planning on heading the business lounge for some free coffee and breakfast.

We were incredibly surprised then, when upon checking in we were immediately offered an earlier flight, departing at 8am. Excited to spend more time in the international lounger we obviously accepted it. Dan was a bit sceptical that we could navigate security and all of Melbourne airport to make it to our new flight within 20 minutes, but he underestimated the power of business class. After being whisked through each line, we boarded our new flight with 5 minutes to spare.

The seats were AH-mazing! We were seriously impressed and had so much room that we couldn’t wait to experience international business class. The only downside was that due to it being an early morning domestic flight there was no free (or otherwise) alcohol, just tea/coffee (non-irish) and juice (non bloody-mary) plus a small breakfast offering…, but at 8am on a Monday morning you can probably forgive them for that.. But the seat space and comfort, the priority -everything- and attentive flight attendants made us very excited for our Emirates flight!

Arriving in Sydney was the same as usual, we had change terminals using the bus transfer to the international terminal, but once we made it through immigration… Lounges here we come!

Our first visit was to the fairly standard Qantas Business Lounge in Sydney. It was a similar to Qantas domestic lounges we’ve visited, being quite large and busy with ‘doctors waiting area’ seats and an open bar and great barista service. However I was pretty disappointed with the food offerings compared to the domestic lounge at Brisbane airport. There was typical breakfast buffet stuff, and 3 or 4 boring lunch items (noodles, chicken curry and rice, etc) with stale brownies and tarts for sweets, but I feel the offerings at previous domestic lounges we’ve been to have been way better.

There was a jovial atmosphere when we were there because heaps of people were sitting together watching the Superbowl (Dan bonded with a bunch of people over their mutual hatred of the Patriots) but it was generally over-crowded and wasn’t quite the fancy and relaxing lounge we were looking for before a 15hr flight. So after full-time we went for a wander and tried to see if we could get access to any other lounge.

Best tip: if you are flying Qantas/Emirates codeshare… GO TO THE EMIRATES LOUNGE! Just do it, trust me.

The Emirates lounge was like a hidden little oasis, staffed with dozens of butlers and only about 6 other travellers. Super fancy and comfy seats, not many people, fancy alcohol (Verve anyone?) and the food was the best! They had about 6 different lunch mains, including salmon and zucchini/cheese cakes, some veal schnitzel thing for Dan and many others, plus an amazing dessert bar including various fancy cheese, cakes and my personal favourite- chocolate crème brulee. It was divine! Plus the people working there were really nice and super attentive- always offering more drinks and clearing plates the second they were empty.

But all good things have to end, and sooner than expected we were called to get ready to board our flight. To say we were excited would be an understatement- we had watched heaps of videos and reviews on Emirates Business class and were expecting something magical… And after building it up so much when we finally boarded the plane we have to admit we were a little disappointed.

To be clear the seats were still 100% better than economy and the extra privileges of business class were great, but I had specifically booked flights out of Sydney so that we would fly Mel-Syd-Dubai rather than Mel-Dubai, in order to fly on the A380 with its amazing layouts, totally spacious and lay-flat seats and Bar behind the business class section on the upper deck. Unfortunately there was a plane change and we were emailed before departure that we were flying the older model 777 instead- which had mixed reviews.

Now I definitely don’t want this to sound like a whinge, because we still had a very comfortable flight and would 100% choose to continue flying business class if we could afford to, but we want to tell it like it is, and unfortunately the older 777’s just don’t compare with the A380 or new layout 777’s.

The seats didn’t lay flat (they had a decent amount of recline, but it’s not the same as laying down 100%); they are noticeably narrower than more modern ones (and even narrower than our Qantas domestic flight) and the layout is 2-3-2 meaning the middle person doesn’t have direct aisle access and has to climb over the outside people, unlike the A380 (and our domestic flight) where its 1-2-1.

Additionally, we were notified once in the air that they had forgotten the mattress pads usually offered to take away some of the lumps and make the seats more comfortable and bed-like in business class, and instead were offered an extra blanket and pillow to make up for it. They were very apologetic and nice, and we totally wouldn’t have known it was a thing unless they told us, but I found the not-totally-flat seats (lumpy middle of the seat) and lack of padding a bit uncomfortable on my hips when sleeping.

Each seat came with power-points for charging phones and laptops, and we were given a toiletries bag (male and female specific) containing some great items that we’ve definitely made use of during our trip so far.

During the flight the flight attendants were amazing, very friendly and attentive, constantly offering drinks during meal service and during the flight. They regularly made rounds when everyone was sleeping offering alcoholic and non-alcoholic beverages as well as hot snacks to those awake (arancini balls- yum!). Plus the food was wonderful. We were given multiple courses for dinner and then hot breakfast plus unlimited pastries, plus continuous ongoing drinks (I may have had a lot of champagne, and Dan still claims the French red in business class was the best he’s ever had).

Once we landed in Dubai we were among the first off the plane, meaning we were quick through immigration, and then our priority bags were already on the belt when we got there.

We had pre-booked a chauffeur transfer, courtesy of Emirates, to our great layover hotel, courtesy of us due to visa issues and change of onward flights (see our issues with Ukraine’s change if visa policy here).

After exiting customs it was quick and easy to confirm our chauffeur transfer and headed to a roped off area directly outside and met our driver. He was lovely and was explaining different sights of Dubai during the journey (which was at 2am his time- so good for him!).

So overall, was it worth it?

DEFINITELY! Despite some of the hiccups and slight disappointment at the plane change and missing mattress pads we would still 100% recommend business class if you can get the points or upgrade using points! It was MUCH more comfortable than economy and we both managed to get a bit of sleep despite stating we would stay awake to enjoy the luxury. Plus the lounges and services were awesome!

But, would we pay for the privilege?

Nope. Not for us anyway. When I searched our business seats from Mel-Dubai it costed over $6,000 EACH! Based on our experience (and probably even if we had been on the A380) it wouldn’t be worth that much to me to fly in more comfort.

Money like that represents more than a month of extra travelling; seeing amazing sights and having incredible experiences. For us no plane ticket, no matter how comfortable or luxurious, is worth giving up an extra month of travel.

So the verdict, if you can get enough points to upgrade an economy ticket or book a frequent flyer reward seat then we would totally recommend business class! If you’re paying outright for the experience… there are much better ways to spend $6,000 if you can put up with some discomfort for a few hours.

If you would like some tips on how we got enough frequent flyer points to fly Business Class, you can read on here. 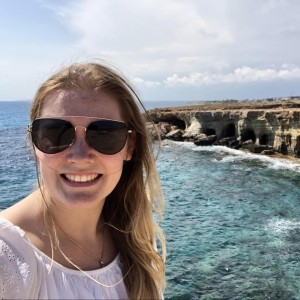 Ashlea is the organised half of the Australian duo behind Dashing Around the World. She is a Registered nurse, wine aficionado and travel addict, and loves spending her days researching and planning travel adventures (complete with spreadsheets). She has travelled to over 45 countries in Asia, Europe, the Middle East, and Africa and doesn't plan to stop anytime soon! She loves sharing the incredible adventures, destination guides and travel tips from her journey.